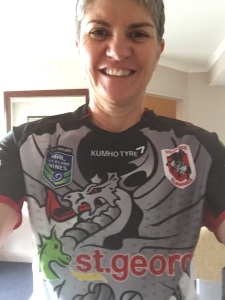 2015 has already been pretty amazing for me.  Lauren wanted it mentioned that she has moved out of home.  Of course we love you Lauren and you are always welcome to visit.  But it was time for you to leave the nest.  And let’s face it your nest is pretty awesome – it has Sky and faster broadband than our place and you are just down the road.  And we can always hear your scooter farting down Pt Chev road. I have just realised that next year I am turning 50 – like really realised as a real thing, not just a vague concept.  So I am determined to keep up with the running and exercise.  I want to get to 50 being fabulous(ish), and so far that seems to be tracking ok despite Mr Gin’s sneaky attempts to derail me. Brett gifted me an 8 week Creative Writing Course run by the Creative Hub for my birthday, which I can honestly say I was quite conflicted about.  But I have grown to really enjoy it.  And it has helped motivate me to get back to blogging.  One day when I feel brave, I will share some of my learnings from the experience http://www.thecreativehub.net.nz/   But it terms of the bestest fun and general awesomeness I would have to say being Team Liaison Officer for the St George-Illawara Dragons at the Auckland Nines this year was just amazement. I have always been a Warriors fan, and I enjoy League a lot more than Rugby.  But we don’t have Sky and I wouldn’t say I am a fanatic.  However when the opportunity came up to help out with the Dragons at the Nine’s I leaped at the chance.  I honestly felt I was one of the luckiest people in New Zealand that weekend. I could go on and on, and I am pretty sure Brett would say I already have on numerous occasions., but here using magical bullet points is a short summation of the experience

As an interesting aside, I actually had an old school St George Jersey with the Penfolds logo on it.   I had bought from an Op Shop in Christchurch for $12 about 10 years ago.  I decided to wear it.  And the team loved it.  It turned out it would have been a similar jersey to the one the team manager Robert Finch would have worn, when he was playing for them.  And they won the Grand Final.  A very spooky coincidence.  Mind you I also have an old school Bulldogs jersey, and it wouldn’t have gone down well if I had turned up in that – just saying