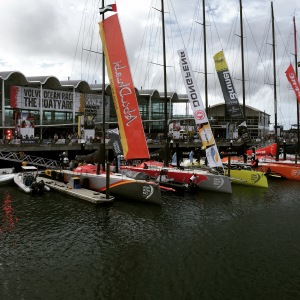 I really miss you now you are gone.

Each Thursday afternoon for the last 6 weeks I have walked down to Auckland Harbour where my writing class has been held.  And for some of that time an area was set up to host the Ocean Race Yachts and their teams.  It has been fantastic.  There was a wine bar, displays, a stage with performers, bean bags so you could just chill out, a kids area and lots of helpful people keen to tell you all about the race and what was going on.

And now it is all gone.  I am actually annoyed I didn’t avail myself better of the facilities.  I mean I could have visited the wine bar or lay in a bean bag for a bit.  It was just so wonderful, I thought it would stay up.  But no, all dismantled and back to being a car park.  Which after seeing how well the space was used seems an absolute waste.

The Queen Victoria cruise ship was in Auckland on Thursday however, and I got to see her.  Huge, dwarfing everything around her.  So big in fact she had to berth a bit further down the port.  Right by where the Ports of Auckland unload all the cars.  Hmm bit of a theme here.  Because nothing says vibrant, world class city than a container port and car yard right on the front door step.

Funnily enough the next day a campaign was launched Save our Harbour.  Which is trying to stop the Ports of Auckland building two huge extensions out into the harbour.  Personally I don’t think the Ports of Auckland should be operating slap bang in the middle of the city.  And I would far prefer that the Port at Whangarei was developed.  It would be a win win for Auckland and Northland.  But what do I know?

Well let me answer that.

I know how to parallel park a 3.5 litre station wagon* like a boss.  On Friday I parked Frank so sweetly, I wished it could have been recorded for posterity.  It doesn’t always happen but sometimes the stars and planets align and you just get the angle right.  It is a great feeling.  As opposed to those times you have the 6 attempts still don’t make it and drive away pretending that you didn’t want to park there anyway.

I also know that my Warriors and Dragons had wins this week.  Fantastic.  There is actually a fan campaign running to sack the Dragons coach Paul “Mary” McGregor.  He really communicates well with the team, and runs a tight ship.  So I think asking for him to be sacked at this stage of the game is really uncalled for.  I don’t think anyone could work harder or care more his side than Mary does.  I really hope the team can get some more wins and the fans let him get on with coaching.

I also know that if I drink too much I feel unwell the next day.  But I do keep forgetting that one.  Oh well, can’t be clever all the time.  Here is a cute Billie pic, illustrating how I felt this morning.

*Yes Frank is actually 3.5 litres of awesomeness not 3 as previously reported.