Well it is that time of the year when everything gets a bit crazy and frantic.  Trucks have accidents in motorway tunnels, a major news item is dogs that can drive cars (not that it isn’t cool)  I would teach Billie to drive the Fiat but frankly I am exhausted from getting Lauren to her Restricted level without taking on Billie.  And a poor woman kills herself because she was a victim of a radio prank.

Personally I hate prank phone calls, I will switch the radio off because I feel so humilated for the person taking the call, and also as someone who answers phones for a living, I know how easy it can be to get caught up in a conversation because you are trying to be polite.  I will never ever reveal the incident where I was was fooled into revealing my bra size and perferences to a pervert who rang me at work because he said he was doing a survey for Berlei.  True story bro, but as I said luckily no one knows about that.  (I was a lot younger then, I would have soo much more information to give that man now)

But… I do feel that that poor woman may have had a few more issues going on in her life and feeling responsible for connecting a prank call may have just been the trigger for a whole lot of other stuff.  Especially at this time of year, when there is so much pressure to be happy, organised and fabulous.  Having said that I personally feel that if you have to make a joke at someone else’s expense and cause them embarrassment, you aren’t that funny and you are actually being a bully.

Which leads me on to a couple of other things.  A good friend of mine currently has a job she loves and it is practically perfect in every way.  But she has to deal with another woman who is the classic work place bully.  Her co worker enjoys putting her down, undermining her and generally creating mayhem.  When she brings it up with management (men by the way), their response is, that is just her way, and we told you she was a bit difficult.  In my view workplace bullies are just mad, bad and dangerous to know.  They have enough emotional intelligence to put in the knife, but not enough to care about the consequences of their nasty actions.  In a perfect world, they would be put against the wall and forced to listen to Chipmunks Christmas Carols *for hours on end, until they saw the error of their ways.

And another good friend of mine has had to go through the very sad experience of watching her mother suffer and die from cancer.  I attended her funeral on Saturday.  And while it was tremendously sad, what a wonderful celebration of a life it was.  There were so many people both friends and family who had so many happy and funny memories about Margaret.  She really lived life to the full and had a lot of fun doing it.  You can’t ask for much more than that.

So what I am really trying to say, (and excuse me for waxing a bit philosophical – I said it was the Silly Season) is even if the turkeys get you down and they are out there (particularly at this time of the year)  We are eventually get parted from each other far too soon as it is, without resorting to desperate measures.  And remember there is a special room in Natty Hell for workplace bullies, stupid DJ’s, car park thieves, masters of the subtle and not so subtle putdown where the Chipmunk music never stops and they get told to just “get over it”

Because I just feel my blog is undressed without a photo or two.  Here is picture taken a few years ago now.  It looks like it was summer time in Te Poi where we farmed until I was 6.

I reckon I must have been about 3 and my sister Julie who is on top of Dad must have been about 1.  Mum’s dog Jake is beside us – have I mentioned dogs are an important theme in our family?  Anyway I think it is pretty cute.  And no wonder I got mistaken for a boy lots 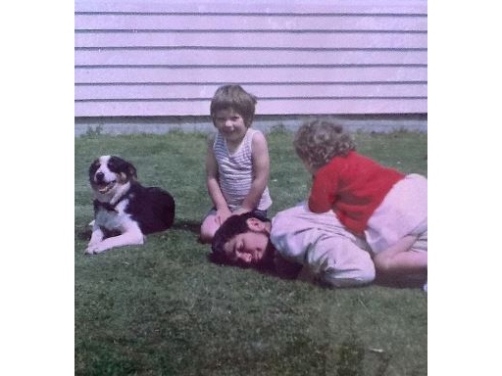 * I say that because Lauren and I listened to one Chipmunks Christmas Carol the other day and we very nearly went postal.  So the perfect punishment I feel