It has been a fairly momentous week both internationally and domestically.  More than one glass of wine gave it’s life on Wednesday night when the results of the American election came through.  I was very happy when Barack Obama was announced at US President for another 4 years.  I know he hasn’t got everything right, but he does appear to be a man of integrity and he does have the interests of all of the American populace at heart.  Which is more than I am prepared to say for the other guy.

So big ups to the US citizens who were able to cut through the bullshit, and making the decision you did.  It must be very hard when there is all that right wing noise about doom and gloom, and why giving people access to basic services means that socialism is just around the corner.

Questions I did have, while the wine was giving it’s life – in a good cause I might add.

On the domestic front.  Ms Lauren Edwards was awarded her Grand Prior Award at St John’s in a ceremony on Friday night.  The Grand Prior is the highest award a cadet can earn, and basically means they know stuff, they have done stuff and should be quite useful in an emergency.  Lauren has worked hard for this award, but so have the many volunteers who are involved with the organisation. I can’t thank them enough.

If you are looking for something for your children to get involved in, I couldn’t recommend St John’s more highly.  As I like to say (Lauren doesn’t like to hear) any organisation that provides a free uniform, access to a range of awesome activities and life skills and all the boy friends Lauren could want.  Has got to be pretty good.

Then on Saturday Billie had her last lesson at Basic Puppy Training.  Jess Allsop runs amazing classes, and there certainly been a big improvement in Billies (and my) behaviour since she has been going.  Brett and Lauren came to watch and they were pretty impressed with how we got on.  So next week we start our next challenge – Refined Manners.  Watch this space.

And here is a photo of Billie demonstrating her Basic Manners (not) She is scratching on our French door, asking to be let in so she can eat her sausage inside.

Finally to round a big week off, Brett and I were lucky enough to get tickets to see Coldplay in a corporate box at Mt Smart Stadium.  They put on incredible show, the sound, lighting and showmanship were first rate.  And it was fantastic to see a group of professionals giving their all at their craft and enjoying themselves as well.

When you arrived in the stadium you were given these cool wristbands.  That turned out to have LED lights inside them, that flashed in time to the music, so that was pretty awesome.  It looked like we were in a stadium full of Christmas lights.  I am attaching a photo, the blue thing is the battery pack.  No use now of course, but it sure beats a glow stick hands down. 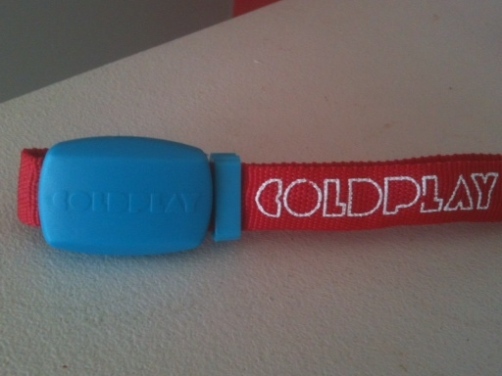 I can’t even begin to tell you how wonderful it was to go to an outdoor concert where I was warm, had comfortable seating, and access to a nice toilet whenever I wanted.  There is no crazy rock and roll chick heart beating within me.  I want comfort and no crushing crowds with my musical experience thank you very much.

I am not expecting next week to be anywhere near as momentous.  But Colleen from Christchurch is coming around for dinner on Wednesday night – so who knows 🙂